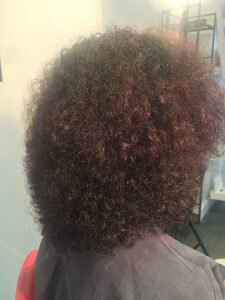 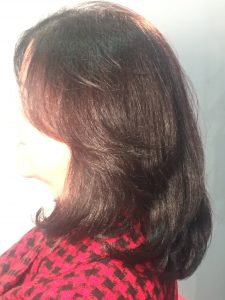 This has been compiled from various sources that I feel are credible. Please contact me if you have any questions after reading the report. Sorry it is a bit long but I wanted to provide all the information that I could.

First, it is important to understand that hair is 90% made out of a hard, fibrous protein called keratin. Keratin is made up of polypeptide chains of amino acids such as glycine, alanine, and cysteine. The individual amino acids are held together by polypeptide bonds, and there are multiple other complex bonds involved. An alpha helix is the polypeptide chain that makes up human hair. In one single strand of hair, three alpha helices are twisted together to form a protofibril. Then, nine protofibril join together in a circle around two or more to form an 11 stranded cable that is called microfibril. Then, hundreds of these microfibrils are cemented into an irregular fibrous bundle called macro fibril. These macro fibrils are then joined to make the cortex or main body of the hair fiber.
Hair straightening options and safety concerns
Running a flat iron through blown-dry hair breaks the hair’s hydrogen bonds. It flattens hair until water or water vapor (from humidity, drizzle or the shower) penetrates the hair fiber and allows the hydrogen bonds to revert to their natural positions.

Salon Favorite Do-It-Yourself Keratin Treatment, another home-use product, was found to be formaldehyde-free in tests conducted by Good Housekeeping Research Institute (GHRI 2011). Glutaraldehyde is potent disinfectant, marketed to health care facilities under trade names like Metricide® and Omnicide®. Many facilities are phasing it out because it is a strong irritant, allergen and asthmagen.
Peter Coppola filed a patent in April 2009 for a product that uses keratin pre-reacted with formaldehyde. Coppola’s hair straightener would also contain glutaraldehyde (a chemical related to formaldehyde) or extra formaldehyde. Glutaraldehyde or formaldehyde may be replaced by alternate aldehydes such as citral, octanal or cinnamic aldehyde (CoppolaP, Bucario VC 2009). Coppola products currently on the market claim to use Timonacic acid and not formaldehyde, but testing by eight different organizations indicate the presence of formaldehyde.
In November 2010, following test results showing high levels of formaldehyde, the manufacturer of Trichovedic preemptively recalled the product, anticipating a mandatory recall ordered by the Australian Competition & Consumer Commission (ACCC 2010). The company reformulated its products. The most recent test reports indicate an average formaldehyde concentration of 0.046 percent, with no detected aldehyde alternatives (acetaldehyde, benzaldehyde, glutaraldehyde or octanal) (Trichovedic 2011B).
But tests published by the company show that the application process releases significant amounts of formaldehyde (Trichovedic 2011). The peak concentration of 0.279 parts per million recorded during a 13-minute application is nearly three times higher than 0.1 parts per million, the level at which the U.S. Occupational Safety and Health Administration requires a warning label. EWG researchers did not find this product for sale in the U.S.

Brazilian Blowout says the active ingredient in its new straightener is glycolic acid, derived from sugar cane. Tests show it is does not contain formaldehyde or release it during use (Brazilian Blowout 2011).
On its website the company claims that the product straightens the hair as effectively as its formaldehyde-based formulations. But in response to questions from EWG, a company representative said that Brazilian Blowout Zero does not leave the hair as smooth and flat as the original formulation.
Its ingredients and process are similar to a 2006 patent filing by L’Oreal that uses glycolic acid (or any other alpha-hydroxyl acid or keto acid) with a flat iron to smooth hair (Malle 2010).
The Cosmetic Ingredient Review has determined that glycolic acid is safe at concentrations of less than 10 percent in home use products and less than 30 percent in salon products.
Is this product safer than the original? Brazilian Blowout long denied the use of formaldehyde in their original product, raising questions about the veracity of their claims about Brazilian Blowout Zero. The new product may be safer, but use at your own risk.

Products that break the strong disulfide bonds that hold adjacent hair strands together can create nearly irreversible changes to hair shape. These changes, which last until the hair grows out and is cut off, are accomplished with lye and similar “hydroxide-based” relaxers, or with chemicals commonly used in permanent wave solutions — thiolglycolate or sulfite-based reducing agents (Radisson 2010). These processes can also cause irreversible damage to the hair.

Hair Perm Treatments typically ammonium thioglycolate
Products that break the strong disulfide bonds that hold adjacent hair strands together can create nearly irreversible changes to hair shape. These changes, which last until the hair grows out and is cut off, are accomplished with lye and similar “hydroxide-based” relaxers, or with chemicals commonly used in permanent wave solutions — thiolglycolate or sulfite-based reducing agents (Radisson 2010). These processes can also cause irreversible damage to the hair.

These straighteners usually contain ammonium thioglycolate and work on the same principle as permanents. Stylists flat iron hair to speed the chemical reactions. The same risks and warnings apply as for perm solutions, including allergic reactions and hair damage.

Alkaline Sulfites
Sulfites and bisulfites can break the hair’s sulfide bond. These chemicals react much more slowly with hair than the ammonium thioglycolate used in Japanese straighteners and are less irritating to the skin. They are common in home-use products (Robbins 2002). Sulfite treatments do not last long (Radisson 2010).
Although the chemicals appear to be less hazardous than other hair-straightening compounds, worker safety information published by a chemical manufacturer says they could trigger asthma attacks in sensitive individuals: “Some individuals are said to be dangerously sensitive to minute amounts of sulfites in foods. Symptoms may include broncho constriction, shock, gastrointestinal disturbances, angio edema, flushing, and tingling sensations. Once allergy develops, future exposures can cause asthma attacks with shortness of breath, wheezing, and cough” (J.T. Baker 2009).

Alkaline hair straighteners, most commonly based on lye, also known as sodium hydroxide, a highly caustic chemical that is also used in drain cleaners like Drano. Alkaline straighteners are said to smell better, work more quickly and last longer than perm treatments using ammonium thioglycolate and similar chemicals (Radisson 2010). They cause irreversible changes in hair strands. They can be caustic and cause irritation and burning, make the hair feel coarse and render it fragile and prone to breaking. Prolonged exposure will dissolve hair (Radisson 2010). Lye-based hair relaxers were the focus of Chris Rock’s 2009 documentary Good Hair, which vividly depicted pain and scalp burning. Sodium hydroxide, a corrosive, can cause severe skin burns and irritation of nose, throat and respiratory tract, and can damage the eyes.

No-lye relaxers, typically less caustic and irritating than lye-based products, are common in home-use products. Between November 2008 and August 2010, FDA received at least five reports of severe adverse effects after the use of no-lye relaxers, according to documents obtained by EWG in response to a Freedom of Information Act request. In each case, the consumer lost hair. Some reports documented baldness and severe scalp burning. The active ingredient in no-lye relaxers is often calcium or potassium hydroxide or guanidinium hydroxide (which is generated by mixing calcium hydroxide and guanidine carbonate) (Radisson 2010). This mixture is less caustic than a lye-based relaxer but poses similar dangers —scalp and skin burns and hair damage. Some no-lye relaxers use ammonium thioglycolate.

Permanent press and other no-iron clothing historically rely on urea-formaldehyde to cross-link fibers. In 2010 the Government Accountability Office reported that formaldehyde releases from textiles had diminished since the 1980s (GAO 2010), following the industry’s transition from formaldehyde to urea-based chemicals because of formaldehyde-related health concerns. Although there are differences between the keratin strands in hair and the cellulose fibers in cotton or wool, aspects of this technology have been applied to hair-smoothing treatments.
In July 2010, a L’Oreal scientist filed a patent for a hair relaxing/smoothing method similar to Brazilian Blowout (Radisson 2010), but some of the listed potential active ingredients are urea-based molecules, similar to many chemicals used in non-iron shirts (GAO 2010).

Pharmaceuticals
People with curls have elliptical, not circular hair follicles. The elongated opening waves the hair like curling ribbon (Goldstein 2009). Hormonal changes and some drugs can alter the shape of hair follicles, changing curly hair to straight or vice versa (Highfield 2005). No such pharmaceuticals are approved by the FDA for use as hair straighteners, but such products could be marketed eventually.